The Kabbalah model of reality and energy manifestation is useful to Wiccans who want to perform magic. Since magic is the manipulation of energy, and it is important to understand the process by which abstract energy is converted into the physical plane. 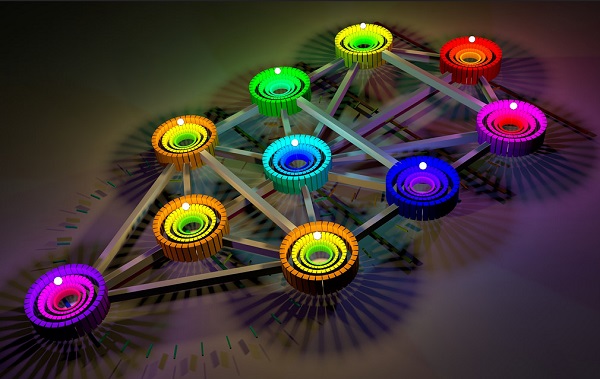 The Kabbalah is an ancient Jewish mystical tradition. Within the Kabbalah, there is a symbolic metaphor for manifestation called the Tree of Life.

The Tree of Life, is made up of ten sephirot (singular “sephira”) and twenty-two paths between them. Each sephira has a specific meaning, and energy travels between the sephirot in specific ways.

All that is physical is considered to emanate as very abstract, divine energy from the first sephira (referred to as the “root,” even though it is at the top of the tree), down the tree through the succeeding sephirot in the order specified until it is manifested in the physical world. Each step down represents an increase in the density and a decrease in the speed of the energy.

In addition to interpreting each sephira individually, the sephirot are also interpreted in groups: the three pillars, the three triangles, and the four worlds.

The sephirot on the left side of the tree – numbers three, five, and eight – are grouped together as the Pillar of Severity. Their characteristics are Understanding, Judgment (or Power), and Glory. This pillar is considered to be feminine, containing the more aggressive and controlling goddess energies.

The three on the right – numbers two, four, and seven – make up the Pillar of Mercy. These sephirot represent the characteristics of Wisdom, Mercy, and Endurance, which are considered to be masculine.

The four sephirot in the middle (one, six, nine, and ten) make up the Pillar of Mildness. This pillar includes the qualities of Crown, Beauty, Foundation, and Kingdom (or Presence). The Middle Pillar contains both the beginning and the end of the process of manifestation, and demonstrates that creation contains a combination of both feminine and masculine materials.

While Wiccans may have trouble reconciling the somewhat reversed qualities of masculinity and femininity, the general idea that both male and female energies are necessary for manifestation to occur fits easily into the Wiccan belief of polarities and union. (See The Tenets of Wiccan Belief for additional information about polarities.)

The first three sephirot are grouped into the Celestial Triangle. It demonstrates the Wiccan tenet cited above: that Spirit is one, and that as manifestation occurs, so does polarity.

Sephirot four, five, and six make up the Moral Triangle. It is at this level that a balance must be struck between the strength of the feminine and the mercy of the masculine – aggression versus passivity – so that a stable entity can be manifested.

The physical work of manifestation – Endurance, Glory (victory), and Foundation – and manifestation itself – Presence – occur in the Mundane Triangle consisting of sephirot seven through ten..

In the Kabbalistic framework there are four worlds, which descend from the most abstract to the material.

Atzilut is closest to abstract and the divine, also viewed as “nothingness.” It is made up of sephirot one, two, and three. In Wicca this might be compared to the Creative Void or womb of the Goddess containing the Crown, Wisdom, and Understanding.

With Beriah, containing sephirot three, four, and five, energy begins to develop self-awareness and an urge to create through Mercy, Power, and Beauty.

At the level of Yetzirah, differentiation begins to occur. Various plans are considered, and choices are made. Sephirot seven, eight, and nine make up this process or Endurance, Glory, and Foundation.

Finally, in sephirot ten, the world of Assiyah, work is done and form is manifested. The energy that was completely undifferentiated at the level of Atzilut is now an activity or a “thing” at the most solid, most slowly vibrating, level of energy.

The world of Atzilut is the world of divine emanations. It is made up of the first three sephirot: Keter, Chokhmah, and Binah.

The first sephira, Keter, represents the Crown, and is similar in function to the Soul Star and Crown chakras. In the sense that all things emanate from it, Keter is referred to as the “root” of the Tree of Life, even though it is as the top of the tree as we view it.

The first sephira on the left, or feminine, side of the tree is Binah. Binah is the sephira of logic and rational thought. It can be associated with the intellectual archetype of the Third Eye chakra and with the Throat chakra.

Working with the correspondences of the sephirot in ritual or meditation is one way to develop an understanding and experience of them. Include these in your rituals when you want to work with the energy of creation.

The world of Beriah is the world of creative impulses. It is made up of the second three sephirot: Chesed, Gevurah, and Tiferet.

The fourth sephira, Chesed, represents Mercy, and is similar in function to the Throat and Heart chakras. It is the part of the Heart chakra that makes allowances for others human frailties.

Gevruah, the fifth sephira, represents Judgment and Power. It is the less charitable, more goal-seeking aspect of the Heart chakra.

The balance between Mercy and Judgment is Beauty, symbolized by Tiferet, the sixth sephira. Tiferet helps us the remember that we need both discipline and compassion when we aspire to create something – the archetypal balanced Heart chakra.

Working with the correspondences for these sephirot in ritual or meditation can help you to connect with the moral issues involved in selecting a magical desire.

The sephirot of the Yetzirah, the Third World, do the work of creation. They are Netzach, Hod, and Yesod – Endurance, Glory, and Foundation.

Netzach is associated with the Solar Plexus chakra. It is will, endurance, the drive to accomplish something.

Hod represents Glory or Victory. It is desire, associated with the Sacral chakra.

Yesod actually creates or builds the Foundation on which our creation will manifest. That foundation, and the building of it, are associated with the Root chakra.

Working with the correspondences of these sephirot in ritual or meditation helps you to connect with the actual work involved in manifesting a magical desire.

Assiyah represents the physical world. It is the point of manifestation – of physical activity, circumstances, and objects.

Assiyah is the counterpoint of Keter. The energy of Malkhut in Assiyah is much slower and more dense than that of Keter, and yet the energy of Keter is contained within it. Malkhut reminds us that the physical world is derived from divine energy – something that all Wiccans and Pagans know as they worship the divine within the natural world. This is similar to connecting to the Earth through the Earth Star chakra.

Working with the correspondences of the Malkhut in ritual or meditation helps to remind us of the presence of the divine in the mundane.