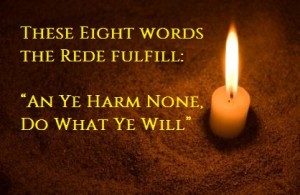 What is Wicca really, and what do Wiccans believe in?

1. Witchcraft means “Craft of the Wise Ones” and is also known as the “Old Religion”. Its practices can be traced to Neolithic (“Stone Age”) cave paintings. In early times, the Witch was the local lawyer, psychiatrist, and doctor. The field of modern medicine can trace its origins to the herbal medicines of the Witch.

Witchcraft is a nature religion, not unlike the shamanism of the Native Americans. As the concepts of male and female exist through-out life — indeed, are necessary to create it — most Witches perceive Deity as male and female: the Goddess and the God. Like the concept of the Trinity, these aren’t “many” Gods; they are aspects of the ONE Creator.

The Goddess is seen as Mother Earth and Mother Nature, and is represented by the Moon. She is seen in the fertility of the plant, animal, and human kingdoms. Her power is at a peak in the “fertile half” of the year, from May until October.

The God is seen in the woodlands, the Sun, grain, & the hunt. Because most of the animals that prehistoric humans hunted had horns, He is usually depicted as the “Horned One”. His power is at a peak in the “dark half” of the year, from October to May.

2. Wiccans don’t do evil. They believe in the Wiccan Rede, which is “If It Harms None, Do What You Will”. (In other words, “Dowhatever you want; just as long as it doesn’t harm anyone — including yourself “).

Witches also believe in the Three-Fold Law, which states that whatever you do — be it good or evil — comes back to you three times over, so (obviously) there is no incentive to do evil.

When the Christian Church decided to obliterate religions that were a threat to its power (including Witchcraft), they decided that their “Satan” had horns and that Witches were actually worshipping the Devil. This became the death warrant for millions of innocent people. 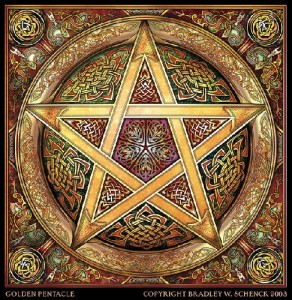 4. The Pentagram (a five-pointed star in an upright, one-point-up position) is the symbol of our religion. The top point symbolizes Spirit (the Creator) being ‘above’, or ruling, the Four Elements of Life — Air, Fire, Water, & Earth — which are the four lowerpoints.

The Circle, being without beginning or end, symbolizes the Deity. It is completely encompassing the Star within it (which represents the out-stretched human body, reaching out in search of its connection with Spirit). Together, they represent the Creator’s Protection & Wisdom.

Inverting the Pentagram, as is done by Satanists, symbolizes that the Elements (the “material world”) are superior to the Creator. Unfortunately, through misunderstandings that have been repeated by the media, the Pentagram — in whatever position — has become wrongly equated with Satanism. (Please note, though, that in England, there are several traditions that use the inverted pentagram as a symbol for a second degree — which obviously has nothing to do with Satanism).

6. Wiccans are non-proselytizing; we don’t seek to convert anyone. We feel that all religions are equally valid, and that you should be free to choose the one with which you are most comfortable. No religion has the monopoly of God (despite what some may claim).  In our opinion, far too many religions place too much emphasis on the actual religion (or it’s leader), and seem to be worshiping that, instead of God. This, in our opinion, is wrong thinking.  As long as it doesn’t infringe on the rights of others, we all have a right to our own method of worshiping the Deity.