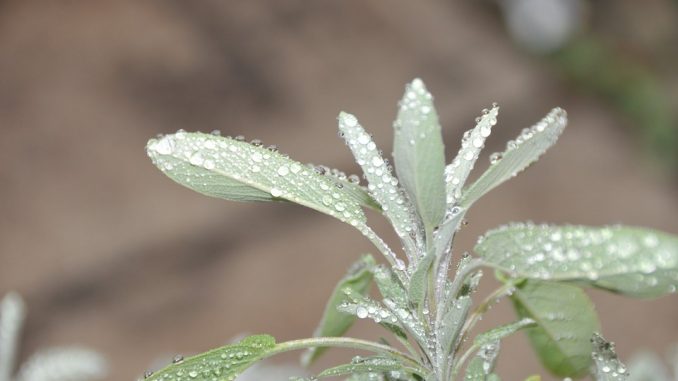 Sage is used for many spiritual practices, including purifying and cleansing. Sage gets rid of negative energy and brings everything into balance. White sage is the kind most commonly used for this purpose.

About the Sage Plant

White Sage is traditionally used as a cleansing plant by Native Americans for healing, ceremonies, and to remove negative energy. The belief is that it’s also mind enhancing. You can find it in many areas of California, Arizona and other western states as it prefers a lot of sun and doesn’t need a lot of water. You can also find it in Northern Mexico and parts of Canada.

White sage grows to about 2-3 feet tall and the plant bushes out to several feet. The leaves of sage are gray, and it’s different than the herbal variety people grow in their gardens. The leaves of the White Sage are what are used for smudging.

Tobacco is one of the sacred plants of Native Americans so the custom and belief is that when you pick sage (or receive any gift from nature) you should give the gift of tobacco to the plant first. This is a respectful way of thanking the earth, the plant, and the Creator for the gift you are about to receive. Just sprinkle a little tobacco on the plant first, then after you give thanks pick only as much as you need and will use.

The best time to pick sage is during the summer months, usually June and July. One thing to remember before picking is to never take more than you will use.

After you have given the plant your gift, or offering, of tobacco you can take what you need. Pick from the bottom of the plant by breaking off the stalk near the ground without disturbing the roots. Pick a few stalks for each wand, or sage stick, that you want to make. Afterwards you’ll tie these stalks together and allow them to dry by hanging upside down.

Sage usually takes a few weeks to dry before you can use it for smudging.

Before you can smudge with sage, or cleanse the body you have to dry the sage.

Once the sage is dry there are 2 ways to smudge- either by using the leaves in a bowl, or with a smudge wand/stick. If the sage is dried without wrapping it gather some in your hand, roll it into a ball, and put these pieces in a bowl. Many people use an abalone bowl for this. Others use different types of bowls. The choice of bowls differs, but the belief of burning sage for cleansing and purifying is the same.  Smoke from the sacred sage (or sweetgrass) is what has the healing powers.

Light the sage pieces. The smoke that arises is what is used to carry the negative energies, bad thoughts, or bad spirits away from the person or place, and prevents them from entering an area. The smoke carries these to the Creator when a person uses their hands to wash the smoke over themselves. Some people walk around a room carrying the bowl and use their hand, or a feather, to spread the smoke around.

A Smudging stick, or a smudging wand, is also used for convenience. Freshly picked sage is placed in small bundles, wrapped, and hung to dry. Once it’s dry (usually a couple weeks) you light the larger end, then as the fire dies out the smoke is used the same as if you used a bowl. You can also buy sage smudge online if you can’t easily make your own.

Note: Make sure you extinguish the fire by tapping the end into a bowl or other non-flammable object or surface before using the smudge stick.

How to Smudge with Sage

Smudging yourself is easy since you already know where your negative feelings and thoughts are. Take the smudge stick and fan the smoke over your whole body starting with your head. If you feel certain areas have more negativity than others, give more concentration to them.

If you are using the smoke from a sage bowl, use your hands or a feather to spread the smoke over your body. Think of it like a shower, where you clean yourself and feel refreshed afterwards. Smudging is the same, but with the smoke from the sage replacing soap.

If you are smudging someone else, you would do this the same as you smudge yourself.

Other Uses for Sage

For a variety of sage sticks, check out World of Witchery!