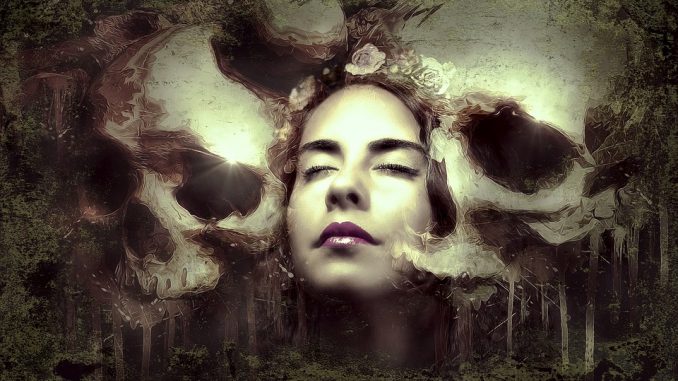 At night, particularly at the dark of the moon, this goddess walked the roads of ancient Greece, accompanied by sacred dogs and bearing a blazing torch. Occassionally she stopped to gather offerings left by her devotees where three roads crossed, for this three-fold goddess was best honored where one could look three ways at once. Sometimes, it was even said that Hecate could look three ways because she had three heads: a serpent, a horse, and a dog.

While Hecate walked outdoors, her worshippers gathered inside to eat Hecate suppers in her honor, gatherings at which magical knowledge was shared and the secrets of sorcery whispered. The bitch-goddess, the snake-goddess, ruled these powers and she bestowed them on those who worshipped her honorably. When supper was over, the leftovers were placed outdoors as offerings to Hecate and her hounds. And if the poor of Greece gathered at the doorsteps of wealthier households to snatch the offerings, what matter?

The Origins of Hecate

Some scholars say that Hecate was not originally Greek, her worship having traveled south from her original Thracian homeland. Others contend that she was a form of the earth mother Demeter, yet another of whose forms was the maiden Persephone. Legends, they claim, of Persephone’s abduction and later residence in Hades give clear prominence to Hecate, who therefore must represent the old wise woman, the crone, the final stage of woman’s growth- the aged Demeter herself, just as Demeter is the mature Persephone.

In either case, the antiquity of Hecate’s worship was recognized by the Greeks, who called her a Titan, one of those pre-Olympian divinities whom Zeus and his cohort had ousted. The newcomers also bowed to her antiquity by granting to Hecate alone a power shared with Zeus, that of granting or withholding from humanity anything she wished. Hecate’s worship continued into classical times, both in the private form of Hecate suppers and in public sacrifices, celebrated by “great ones” or Caberioi, of honey, black female lambs, and dogs, and sometimes black human slaves.

A Goddess of Death and Rebirth

As queen of the night, Hecate was sometimes said to be the moon-goddess in her dark form, as Artemis was the waxing moon and Selene the full moon. But she may as readily have been the earth-goddess, for she ruled the spirits of the dead, humans who had been returned to the earth. As queen of death she ruled the magical powers of regeneration; in addition, she could hold back her spectral hordes from the living if she chose. And so Greek women evoked Hecate for protection from her hosts whenever they left the house, and they erected her threefold images at their doors, as if to tell wandering spirits that therein lived friends of their queen, who must not be bothered with night noises and spooky apparitions.

Mother of the Heka, the magickal power of the word, She who holds the moon’s magnetic reigns on ancient magic spells, was known first in the Nubian tongue. Sacred Goddess Heqit, Ancient Goddess Hekat, Oldest of the Old, amphibian being that swims in the water, yet walks upon the dry land, was the magickal essence of Isis, She whom all of Egypt called upon, summoning Her from the land of Africa to do Her wondrous works – for the emanations of the Heh Ka, the mighty energies of a million hearts, are contained within Her. Holy Enchantress, Mother who brings birth and rebirth, forever renews the cycle of existence – as the frog brings forth the tadpole, as the tadpole turns to frog, so Hekat guides the transformations, giving power to the spoken word of sacred incantation.

Those who later called upon the magic of Hecate, spoke Her name in the woods of Thessaly and Greece, as magician and wizard, sorcerer and witch, followed Her ancient knowledge. There they used the sacred cauldron at the threefold crossroads, in the darkness of a moonless night, adding wine or milk or blood in which to stir the sacred herbs, only those that had grown by moonlight, adding sacred stones from the East, using the olive or the willow twig to stir the contents of the bubbling, boiling cauldron – as those who called upon Hecate circled thrice about Her altar, laying flaming twigs upon it.

Even as the wind was sleeping, as were all the others of the village, the magic women of Hecate addressed themselves to each planet of the sky, to each watching star in the heavens that grew brighter as they spoke, listening to the hounds that bayed their knowledge of Her holy prescence. And when the chariot of Hecate descended to take them to unknown regions, it was drawn by winged serpents who carried them across the vast heavens of night, as they called upon the Holy One who comes and goes as Artemis, as Diana, as Cynthia, as Selene – as Hecate, The Hidden One, Mighty Queen of Witches, Mother of the ancient Heka magic.