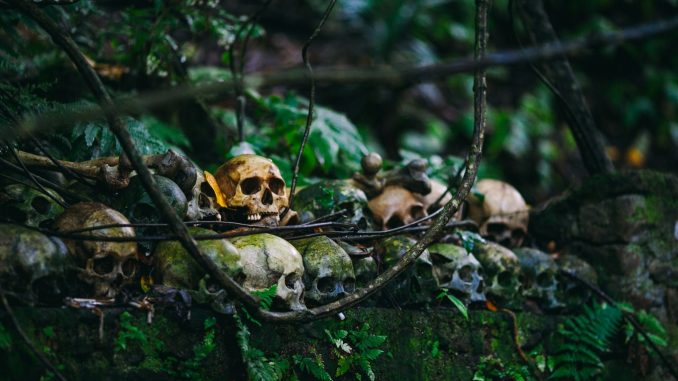 The old gods were just as diverse as the people that worshipped them. Before monotheism made an appearance on the world stage, tribes and pagan kingdoms used to bow down to an entire collection of deities that were divided into good and bad, and were responsible for all activities happening throughout the world. These gods all had a story to narrate in terms of their origins, their purpose, and their relation to their worshippers.

Let’s look at some of the death gods in different mythologies.

The Slavs had a number of deities but none among them was more feared than Crnobog who was also known as the dark master and was the god of the night, misfortune, winter, and chaos. He was reputed to generate all the evil activity throughout the world. It was believed that Crnobog’s reign of power began with the winter solstice when the nights are at their longest and lasted until spring when the power changed hands to favour Belobog who was the god of light, summer, and goodness.

The two deities had nothing in common with each other despite the world being born because of their joint efforts. The conflict arose during the creation and it was their discord which led to the creation of the universe. The Slavs viewed the duality between good and evil differently from the way Christianity views it presently. The people that were worshipping Crnobog did not consider him a lesser individual despite the fact that he was viewed as the dark master. Death, misfortune, and chaos were believed to be part of everyday life similar to an equilibrium with the good things that were also happening to people.

The information we have about Slavic mythology and their customs comes from Helmold of Bosau, who was a historian as well as a Saxon priest in the 12th-century town of Bosau, which is in present times known as Germany. Crnobog was responsible for Christianizing the Slavs from the Polabian. In one of the historical records maintained by him, he states how the pagan people all drank from a single cup as they uttered curses rather than prayers. The curses they uttered were not directed towards others but were for themselves to indicate that the Slavs did not shun hardship along with bad luck and believed it was the will of the divine and a requirement of life.

Coatlicue of the Aztecs

In order to understand how the Aztecs regarded this mother goddess, we must initially try to understand how the people of this Central American empire viewed the world. They had the belief that the planet earth was currently in its fifth era. They also believed that the sun needed a regular source of human blood as a sacrifice to come forth every day. This was perhaps the reason why the Aztecs were viewed by the Spanish conquistadors during the early 16th century as savages and bloodthirsty barbarians who worshipped demons. Human blood was valued by the natives, who rarely killed their opponents in wars, but rather chose to capture them to be sacrificed atop the high altars. It was believed to be a great honour and the best way for a human to die, because the sacrificed humans could then live as kings in their afterlife.

The story of Coatlicue provides us information that before the dawn of the fifth age she was the goddess of the earth who was sweeping the shrine on top of Mount Coatepec which was alternatively known as the snake mountain. It was at this time that a feather from the sky dropped into her apron leading to her immaculate impregnation which led to the birth of the mighty god Huitzilopochtli, who was known as the god of war and the sun.

A Mexican historian had made a terrifying discovery in 1790 as he uncovered a 2.5 m statue in the heart of the city. The imposing statue was covered in snakes, skulls, and human hearts, and was found in the heart of Mexico’s capital which has been built above the capital city of Aztec Tenochtitlan.

Given above are just two of the death gods in different mythologies. Going through history, we come across several death gods that have not been mentioned in this article. The gods may not sound like pleasing characters, but they definitely give people an understanding of the mythology which existed in the past.

I`m Eva Henderson, writer, traveler and content coordinator at oddsdigger.com. I enjoy outdoor activities, reading and mythology. Hope you will enjoy my articles! If you want to learn more about me and my hobby feel free to visit my Facebook and Twitter accounts.