In a modern Wiccan’s perspective, a familiar is a witch’s companion in both the spiritual and physical realms, often chosen intuitively by the witch, and is commonly an animal spirit who has made itself known as a magickal partner to the witch. Because a familiar is a shapeshifter, they can go to places where the witch is physically incapable of, they can access things on a purely energetic level, retrieving energies, psychic impressions and messages from the spirit realm to bring back with them to be worked with magickally with their companion.

While they assist in the physical dimension by providing the connection to animal instincts, companionship, and protection to their partners, they are also believed to assist in the spiritual dimension with retrieving psychic information for the witch’s benefit, which often aids with divination and spellcasting.

In some cases, historically familiar spirits were called demons and were considered to be evil, while in other cases, animal familiars were considered to be saints or angels looking after their respective owners. Records show that during medieval times, accused witches were associated with having familiar spirits do their biddings for them, and oftentimes the familiars were prosecuted alongside the witches for evil-doing in their village.

There are many ways to find your familiar animal spirit and to begin working with them. The methods to finding a familiar will vary from person to person, but many witches find their familiars initially through astral projection, lucid dreaming, and deep meditation. The affinity you have with a familiar spirit is mostly sensed, and will most likely not be on a cerebral level. One of the most important methods of all is to follow your intuition if you have an affinity to a certain animal or pet, your intuition will give you a sign whether to initiate contact with that animal and to begin developing a relationship with it.

It’s important to always remain open, even if an animal familiar presents itself to you in the least likely time or place, and gives you the impression that it wants to work with you as your familiar spirit, then that’s most likely the case, but, always pay attention to what you sense from any encounters like this and go from there. Lucid dreaming is a method favorited by most Wiccans for meeting your familiar in the spirit realm. 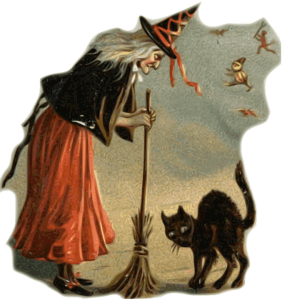 There are many beliefs about familiars found in European folklore. Amongst them is the old folklore about the cunning-folk and white witches of Exmoor in Somerset, who reportedly mainly practiced magick with familiars in the wild. They would contact these familiars during the night of the full moon by listening to which animals sounds they heard first. Then they would make repeatable sounds while visualizing themselves entering the body of that animal and experiencing the world as them. It took much practice until they were able to draw the animal familiar nearer to them, but eventually they were able to look directly into the eyes of the animal, where they could feel what the animal was feeling, and share an instinctive sense with the animal and distinguish that animal as their familiar to work with magickally.

Animal Familiars and Their Personalities

The Dog is a witches companion in the earthly realm, they can teach about loyalty and protection, and will alert a witch of any danger.

The Cat can teach about independence and nurturing yourself. They are protectors of the home and guardians of the spirit dimension. They are easy companions to have and work in both day and night spirit realms.

The Goat is very sacred to the Greek God Pan, who was half-goat, half-man. They have very quirky personalities and can teach about maintaining your uniqueness, and can climb the mountains of life to show you farther perspectives.

The Hare/Rabbit is very sacred to a witch. They can teach about secrecy, quiet movements and solitude. They live in holes in the earth, and can help you travel underground or to the underworld.

The Spider is a good familiar to work with because it can hide easily, it can fit through the cracks of a doorway, and can be carried wherever you go without ever being noticed. It’s an effective intuit, hunter, and spy.

The Ferret is a good domestic familiar to work with because it teaches about remaining skillful, playful and inquisitive in all types of domestic conditions.

The Bat can teach about our nocturnal instincts, our lunar connection, and they can help us access the unconscious and the darkness of the night.

The Owl can teach about one’s own wisdom and connection to the trees. Majority of owl species are nocturnal, they hunt in the night and keeping very alert from predators at night as well. They live in the hollows of a tree, and make a fantastic familiar while attuning to lunar rhythms and learning to stay alert and aware at night.

The Toad is a fabulous garden witch’s familiar. It’s a small creature with very strong senses. It lives amongst bodies of fresh water, plants and the earth’s soil, so it can sense weather changes before they occur, and can teach about weather prediction and accompany us in gardening with magickal plants.

The Raven/Crow can teach about our cunning nature and how to use our magick and our voices in powerful ways. They are extremely intelligent creatures, who will be the first to make a sound spreading the news to the animal’s in the forest should they sense someone or something is up to no good in their territory.

Breigh Frye is a Writer, Folk Herbalist, and Wiccan High Priestess. She has performed wheel of the year ceremonies and led women’s circles for over 10 years and has a very down to earth and practical approach to practicing Wicca. She works very closely with the earth element and the hedgerow plants and she formulates many rituals and spells with what’s growing at her feet at any given time of year. You can find her on Instagram, Facebook, and Twitter as “The Earth Priestess” or at her website: www.BreighFrye.com.