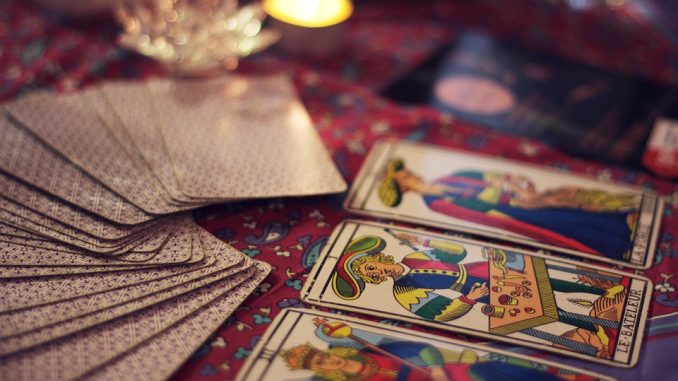 There are several terribly romantic hypotheses surrounding the origin of the Tarot, including the concept that it was an ancient Pagan system of prophecy, or an encoding of the mysteries of the universe. These fanciful myths are just that – myths. The Tarot was not created in Egypt, China, and especially not in Ireland or England; it was not developed as a key to universal energy by the Qabalists, or by the Romani as a system of magical divination.

Quite simply, it was developed in Italy during the fifteenth century as a simple card game much like our modern Bridge, which involved taking trumps. It was based on a regular deck of playing cards (four suits each containing ten numbered cards and three court cards: page, knight and king). The Tarot added a queen card to the court cards in each suit, and twenty-two unique cards not assigned to any suit. The Tarot was derived from the regular playing deck, not the other way around as many people assume.

What we now call the “Major Arcana” was referred to as “the trumps” (interestingly, the Fool was not considered a trump card), while the Minor Arcana was termed “suit cards”. The original suits were known as “coins”, “staves” or “batons”, “cups” and “swords”, and the deck and the game were known as carte da trionfi (cards of triumph). A century later the name evolved to tarocchi (singular tarocco) to differentiate between the unique card deck and a new game of trumps introduced that could be played with ordinary playing cards.

This augmented deck of cards was used to play a new type of game which involved taking trumps, but with twenty-one of the special cards (remember, the Fool was not a trump outranking all the ordinary cards and acting as permanent trumps, which could be played regardless of what suit was led. The Fool could be played at any time without taking a trump. This game became known as the Game of Triumphs, and caught on as a popular pastime among the upper classes, particularly in northern Italy and then travelling to eastern France, and later to Germany. As the game travelled and new decks were created, illustration and design evolved to reflect the geographical and cultural systems it encountered, as did the names of the trump cards.

The Tarot was not specifically connected with divination; playing cards of all kinds were used as a form of cartomancy. The earliest documentary evidence for Tarot being associated with fortune telling occurs in the eighteenth century, when specific divination decks (such as Mme Lenormand and the Grand Ettelia) were developed. The Tarot also began to be associated with the occult around this time. As occultists began to examine the Tarot around the same time, they recognised various elements of mystical and spiritual importance to their traditions and began to rework the illustration and interpretation to reflect their own belief systems.

There is no one true system of correspondences for a Tarot deck. On the contrary: Tarot as a system of divination appeals so widely because of its wide variety of interpretations. Various systems are internally consistent within their traditions, but while traditions may have similarities, cross-corresponding is not necessarily always successful owing to the basis for how those correspondences were developed. The images in a Tarot deck are archetypal, and speak to one’s unconscious; it is used nowadays as a meditation tool for self-improvement, a method of contacting one’s intuition, and as a system of divination.